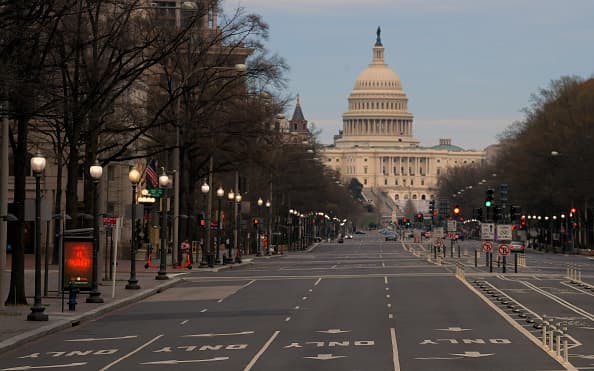 Looking east towards the Capitol Building on a vacant Pennsylvania Avenue at 6:49 pm due to the coronavirus pandemic in Washington, DC on March 20, 2020.

Democrats and Republicans on Monday continued negotiations over a massive stimulus funding package that failed to get enough votes in a key Senate procedural tally Sunday evening.

A Senate vote on the bill originally planned for 9:45 a.m. ET has been pushed to noon, people familiar with the situation told CNBC.

Treasury Secretary Steven Mnuchin told CNBC on Monday Congress is “very close” to a stimulus agreement and must get it done “today.”

The administration is eager to halt the crushing economic impact of the coronavirus and the uncertainty it has caused investors. The Federal Reserve said Monday it will launch a barrage of programs to help the markets, including an open-ended asset purchase program and moving into corporate bonds for the first time.

President Donald Trump, in a series of tweets Sunday night and Monday morning, signaled resistance to continuing stay-at-home guidelines for more than 15 days − and an urge to return to normalcy. “WE CANNOT LET THE CURE BE WORSE THAN THE PROBLEM ITSELF,” the president wrote.

The final Sunday night tally was 47-47, well short of the 60 votes needed to advance the bill, after Democrats laid out a number of objections to the Republican proposal. Those issues included what Democrats said was a lack of protection for workers and sufficient funding for hospitals. They took aim at a $500 billion fund to support “severely distressed business,” arguing it allowed too much control to the Treasury.

Mnuchin said the Federal Reserve can leverage that fund to offer more than $4 trillion in support to U.S. businesses.

The fund allocates $58 billion for passenger and cargo airlines and $17 billion for businesses critical to maintaining national security. It leaves the rest open to businesses, states and municipalities. Companies from hotels to restaurants to manufacturers have argued the coronavirus has pummeled their business, and they need government aid just to stay afloat.

The proposed bill gave considerable authority to the Treasury to implement the fund, including discerning which parties receive money. It did offer concessions to Democrats like a ban on stock buybacks for companies that receive federal aid while a loan is outstanding, and maintaining payroll “to the extent practicable.”

Some Democrats, though, worried those stipulations weren’t strong enough. One Democratic aide said opponents believe the bill gave Treasury the power to waive the ban on buybacks.

The proposed bill also limited compensation at companies that receive financial assistance from the fund for executives who received more than $425,000 in total compensation in 2019. Those executives may not make more for the next two years than they did last year, it said. Some Democrats have sought stricter rules around compensation.

Meantime, airlines also expressed discontent over the proposal. The industry has sought relief in the form of cash grants and loans, but the $500 billion fund only offered loans and guarantees.

Still, there may be other ways the government could help bridge the divide, like offering airlines zero-interest loans, or loan forgiveness if they fulfill certain obligations, such as maintaining payroll.

This is a developing story. Check back for updates.

Trump is set to cash in as his Washington, D.C., hotel is sold out for election night

Trump is set to cash in as his Washington, DC, hotel is sold out for election night

Walmart pulls guns, ammo off sales floors because of ‘civil unrest’ in some areas, but will still sell those items